My life without BHAGs

A couple of years ago I was hanging out with another coach doing some goal-setting.  I’m a goal-oriented person but the ones I was listing – grow business, finish book, have a fun trip somewhere – weren’t exciting to me.

“You don’t have any BHAGs,” Jennifer said.

BHAG stands for “Big, Hairy, Audacious Goal.”  It’s a phrase created by Jim Collins in his bestseller, Good to Great, and is supposedly one of the things that separates great companies from good ones.  Great companies set BHAGs.  MBA students and other business types use this expression a lot because it applies as much to personal goals as business ones.

The idea of setting a BHAG is to push you beyond incremental, small-minded, uninspiring change.  It moves you from what you are pretty sure you can do to what you are not sure you can do, but which you WANT to do.  A BHAG can be based on great self-belief or just great desire.  Either way, when you name a BHAG you’re putting it out there, inviting the world to witness your success or failure.  You’re daring yourself to move beyond your current definition of what’s possible.

BHAGs push people (and companies) to create the kind of change that matters.

I’ve had some BHAGs before, especially in my youth when I had less going on and therefore felt more audacious.  The gap between where I was and where I wanted to be was large.  I joined speech and debate in high school, even though I grew up with a lisp and trembled when I spoke publicly. I wanted to go to the college of my choice, which I decided was Harvard, even though I knew no one who’d ever gone there and many people assured me I could not.  I wanted to learn Chinese because it was so foreign and weird and hard.  And I would say my coming-out process was a kind of BHAG – instead of feeling afraid, persecuted and closeted, I dared myself to be out, loud and proud.

The funny thing about BHAGs is that by making you push beyond yourself, they allow you to become your true self.

Which brings me to this conversation a couple of years ago, when Jennifer told me I had no BHAGs.  She was right. The personal and career goals I was writing down weren’t big, they weren’t scary, and I didn’t much care about them.  They were respectable but they weren’t exciting.

My BHAG shows itself

And then, some months later, I suddenly realized that I DID have a BHAG, one that had slipped out of conscious thinking when I had that particular conversation.  This BHAG was one that I’d been pursuing for years, sometimes quietly and sometimes publicly, without any certainty I would be successful but with a repeatedly arising desire to try.  This was a BHAG that was so important, and maybe so scary and unlikely, that it didn’t express itself as a normal goal.  It was like an undercurrent humming along, part of my body rather than something I deliberately thought about.  My big, hairy, audacious goal was:  to become a parent.

This was my BHAG, I went after it, and in going after it I learned a few lessons of general applicability about BHAGs.

A BHAG lurks around before it is fully present. I didn’t just think of this goal last year or the year before. I remember talking in law school to a friend about the merits of having a baby with a friend vs. doing it with surrogacy.  This was 1994. I had a lot of other conversations over the years.  My passion for parenthood came and went, but always came back.

A BHAG really is audacious.  Audacity is boldness with an element of cockiness.  It implies that you are doing something against the norm.  Even now, for a gay man to be a parent is not statistically common.  I would go farther and say that for a man to have the role of a nurturing, loving, guardian of children is still somewhat noteworthy.  Parenthood in America, in my view, is still firmly rooted in femaleness.  It is a kind of burden but also privilege that women have.  A woman never has to explain why she wants to have kids.  Men often do.  “But why do you want to have a kid?” is a question I heard a lot of.

A BHAG starts dividing your world into supporters and non-believers. More than 30 years ago, Marc Granovetter, then a grad student at Stanford, came up with the idea of “the strength of weak ties.”  This phrase means that people you don’t know very well can be much more important resources when you are in a period of change than people you know well. People you know well may not even support your BHAG – it might not match their idea of you or could even be threatening to them.

Telling people that I wanted to have a kid opened me up to love, support and great ideas from people I didn’t know all that well, and it also exposed me to hurtful comments, skepticism and negativity including from people I knew quite well. Not everyone will get on board with your BHAG.

A BHAG will present moments of great doubt and fear.  Going after a BHAG means you are stepping into unknown territory and you are changing yourself.  As I started taking specific steps towards parenthood, I ran smack up against deep-set fears and assumptions that had inhibited my progress for the past twenty years.  And I ran into new fears. Finding an agency, finding an IVF clinic, finding a surrogate, finding an egg donor, creating an actual pregnancy – all of these actions have exposed me to a new set of possibilities and anxieties. BHAGs can scare you!

You achieve a BHAG by slogging through, not through dramatic jumps.  I was describing the complicated and expensive process of having a baby through IVF and surrogacy to friend.  She said, “but you keep marching ahead.”  I corrected her.  “It’s more like slogging through the muck,” I said.  It might take 200 steps or two million.  The steps might feel light or heavy.  But continued slogging is how you make progress.

Your BHAG will surprise you.  You only see one side of the mountain that you want to scale. You don’t know what it will be like on the top, and you don’t know what the other side will be like.  Big surprise for me:  the first ultrasound revealed two fetuses.  We only put in one embryo.  Nature had intervened and created identical twins, which instantly put us in the category of “high-risk pregnancy.”  (Twins have twice the rate of birth defects of singletons, and identical twins have higher risks than fraternal twins.)  “It’s always the ones who are dead set on only having one kid and who just put in one embryo that this happens to,” the fertility doctor said.  “They’re always the ones that seem to end up with identical twins.”  As the saying go, men make plans and God laughs.

You will be tempted to give up.  When you have a BHAG, at some point the going will get tough, and you’ll get a sense of what you are losing without the confidence of what you’ll be gaining.  When I discovered we were having identical twins, every relationship became more complicated, as did the medical care, as did the finances.  I made many visits to Sioux Falls, South Dakota, where our high-risk OB/GYN was based and each time I felt various levels of heaviness along with more positive emotions.

If it’s a real BHAG you won’t give up.  A real BHAG grabs onto you. It insists on occurring. At a certain point, your BHAG isn’t yours anymore.  It’s breathed itself into life. It’s something that accompanies you, and you don’t fully control it.  You won’t give up because you can’t give up.

The biggest lesson about BHAGS

A BHAG insists on occurring.  Just as my twin sons insisted on being born on March 5, 2015.

Your BHAG really will be worth it.  Guess what?  My twin sons are healthy, happy, gorgeous and perfect.  They were the talk of Sanford Children’s Hospital in Sioux Falls.  And why not?  They’re a miracle.  (Did I mention they’re adorable?)  I’m pretty gosh-darn happy, and also proud of myself.  I feel that I just experienced that scene change in The Wizard of Oz, when Dorothy leaves the world of black-and-white and finds herself in Technicolor.

Real BHAGs arise from your deep intuition.  They don’t come from nowhere. They reflect the future you, unencumbered by your daily doubts, fears and hesitations.  They reflect a vision of what your future CAN be.

The leap across the chasm is scary . . .and you might not make it.  But you have to try, and when you get to the other side you’ll be overcome with gratitude for your daring.  You’ll bless the scared but audacious previous version of you that was willing to set things into motion.

Thought questions for you 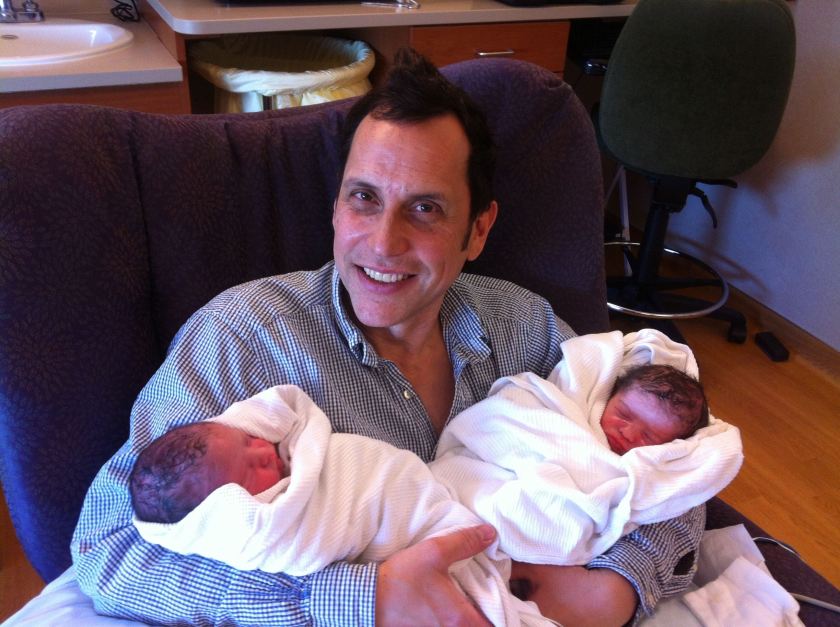 This is a text widget. The Text Widget allows you to add text or HTML to your sidebar. You can use a text widget to display text, links, images, HTML, or a combination of these. Edit them in the Widget section of the Customizer.
%d bloggers like this: